H2 – A world full of colours 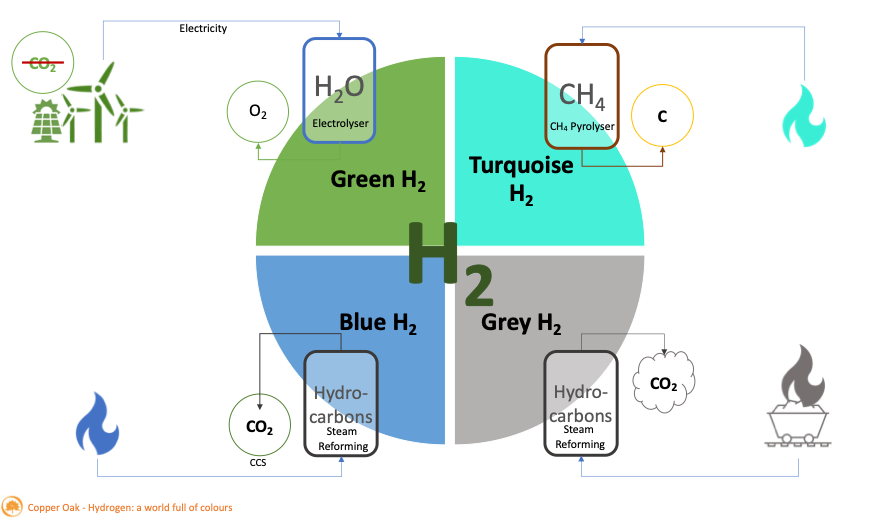 In 2030, 14 September becomes European Hydrogen Day! Ten years before, on 14 September 2022, the President of the European Commission, Ursula van der Leyen, announced that the Commission had created the “European Hydrogen Bank” to invest €3 billion to help develop the European hydrogen market. With this statement, she confirmed the European Commission’s intention, since it unveiled its REPowerEU plan, to supply 20 million tonnes of green hydrogen by 2030, of which 10 million will be produced domestically and 10 million will be imported.

Since then, there has been a flurry of projects, funding and companies talking and working around hydrogen and in the so-called mass media giving it many colours from dark grey to green to blue. Most authors identify 8 colours of hydrogen classified by their mode of production or by the energy source used for its production (coal, nuclear, solar, etc.).
So why hydrogen and why these colours?

In principle, hydrogen has three decisive advantages, depending on how it is produced:

Hydrogen thus scores points against other energy sources. This makes hydrogen the hero some people have been waiting for.

Four colours for one gas

If we aggregate the similar production methods and remove nuclear energy from the picture, Copper Oak likes to talk about four colours for hydrogen.

Is produced by electrolysis (breaking down water into its oxygen and hydrogen components). Renewable energy sources such as wind, water or solar energy provide the electricity for this (Power-to-Gas technology). The production of green hydrogen is thus CO₂ emission-neutral, but currently still requires a lot of energy. In 2021, Germany already had 55 green hydrogen production facilities (so-called electrolysers).

Is the product of the pyrolysis of methane. The methane in natural gas is then cracked into hydrogen and solid carbon. The solid carbon is a granulate that can, for example, be safely stored in old mine shafts and reused later. Thus, no CO₂ is released into the atmosphere. If the energy required for the pyrolysis of methane comes from renewable energies, the production of turquoise hydrogen is climate neutral.

Is produced by steam reforming of fossil fuels such as natural gas, coal or oil. This results in a waste product, CO₂, which is released into the atmosphere. Grey hydrogen is therefore not climate neutral.

Like grey hydrogen, it is also produced by steam reforming, but the CO₂ produced is then stored underground (CCS technique – Carbon Capture and Storage). It is therefore not released into the atmosphere and is therefore also climate neutral. Although carbon dioxide capture and storage is technically possible, it is controversial and prohibited in Germany. Nevertheless, research into this technology is being carried out worldwide until it is put into practice.

This was more of a short explanation than an article defending one or the other hydrogen production.

However, power-to-gas and the green hydrogen is a technology that we support at and with our customers but reality prevents us from ignoring other technologies, especially those using CCS which is also useful to many industries such as waste-to-energy and other high CO2 emitting industries.

If you want to use our diagram in your presentations or other documents, feel free to download it in high quality here (please leave the source quoted at the bottom of the drawing).